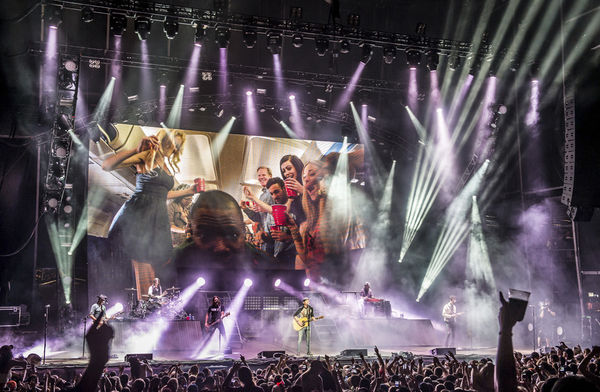 Lighting designer, Chris Reade is back on the road with his Jands Vista T2, S1 and M1 consoles, controlling an even more technically ambitious rig for the latest tour by Platinum-selling singer-songwriter, Dierks Bentley.

After recently topping the US Billboard country airplay chart with his 12th No.1 single, “Drunk On A Plane”, Dierks Bentley and director Wes Edwards have just added the CMA (Country Music Award) “Music Video of the Year” Award, to the song’s other accolades.

The country artist’s 2014 tour is called RISER, after the recent album of the same name. It kicked off in May in Charlotte, North Carolina, with sold-out shows in amphitheatres and arenas across the United States and Canada – concluding in December.

“I can’t say enough positive things about Jands Vista!” says Chris, who first used the Vista platform in 2008, and subsequently invested in his own T2, S1 and M1. “I know Vista will handle whatever I throw at it. We did a massive show at one venue where we had 23 universes of instruments running, with only our tour floor package. The entire lighting rig (besides our floor package) had to be swapped over and the console handled it all.”

Chris continues: “Dierks is really into the visual aspect of his performances, and the Vista platform, in my opinion, puts me in the best situation to succeed in making his shows detailed in a shorter amount of programming time.”

Chris is using his S1/M1 as a tracking backup on the RISER tour, in addition to his main T2 desk. The consoles network through a Pathport VIA switch and output DMX via Pathport OCTO Artnet Nodes.

“It all works wonderfully, and it’s extremely fast,” says Chris. “I also love the speed of editing very detailed timing via the timeline.”

In addition to the larger venues, the tour also plays a selection of fairs, festivals and casinos, meaning that Chris has to reconfigure the lighting rig based on venue capabilities.

“Without the fixture swap/cloning features of the T2, I would not be able to get through a touring cycle without having to start from scratch on the non-tour dates. The timeline is one of my favorite things about the Vista platform. When I’m programming I can bang out my cue lists and then go back and get into the details per cue, per instrument, per parameter, to adjust all of my timing, etc. It is extremely fast to edit a song once the looks are in. I do quite a few ‘follow’ cues, and making detailed timing adjustments is a breeze within the timeline.”

The T2 is an all-in-one lighting package providing all the features that make the Vista such a great live desk: big LCDs, 15 playbacks (10 with faders), four DMX outputs and timecode input, and three encoder wheels for manipulating intensity, position, color, gobo and beam.

The Vista range includes a choice of portable, flexible control surfaces and self-contained consoles all running the same Vista v2 software. The award-winning lighting & media control system has been embraced by leading designers, companies and venues all over the world on a wide range of shows. Covering entertainment, education & drama, installations, corporate, events and worship, there’s a Vista system to suit all levels of user and almost any scale of show.

The Jands Vista console range is being showcased at LDI 2014 on the booth of North American reseller, A.C. Lighting Inc. (booth 2358).

Or for more information and a list of international Vista users, visit
www.jands.com/vista/users.